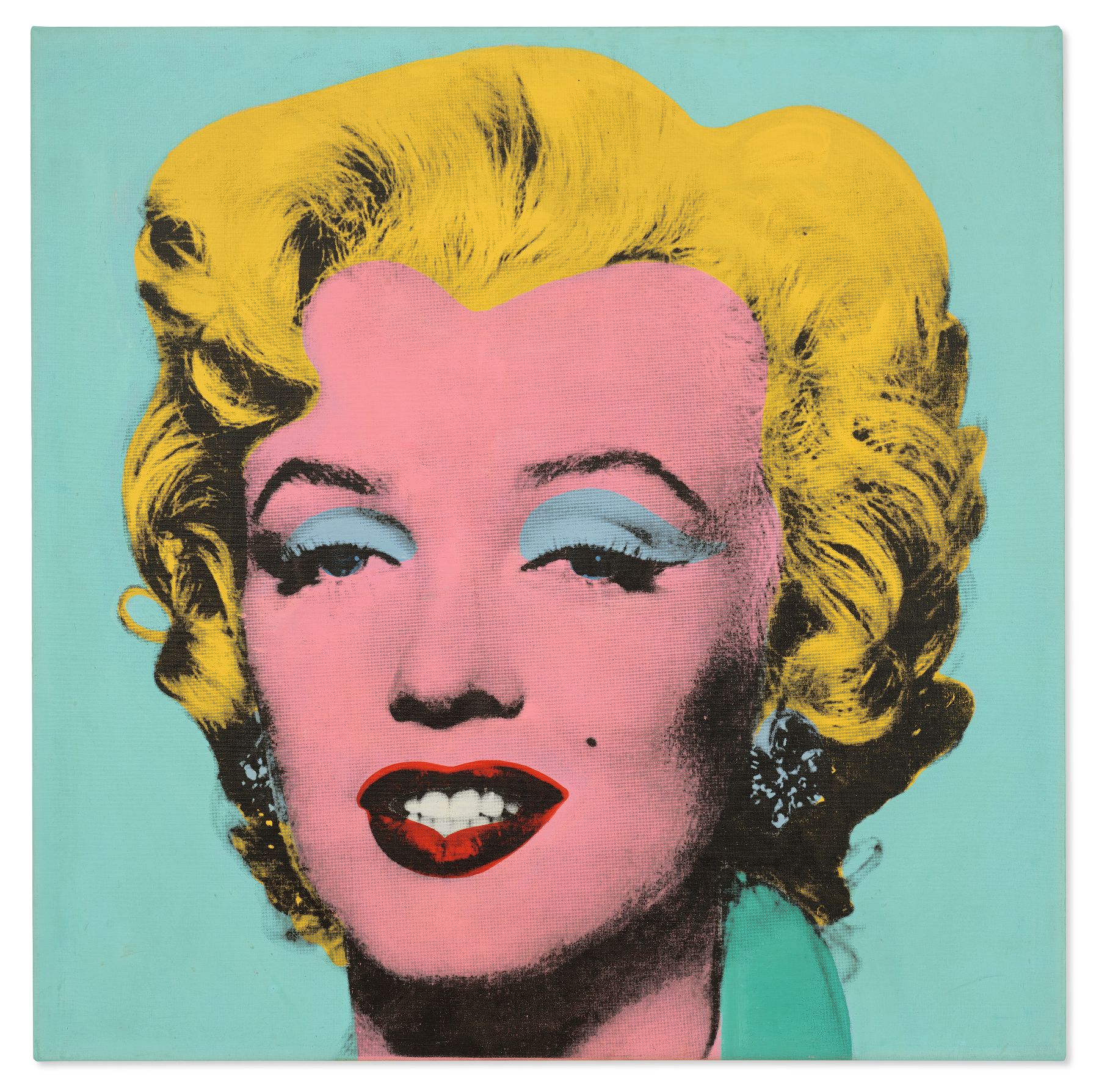 Reflection of the year:

“You no longer have the middle classes buying something beautiful to put on the wall and hang on to it. This is a thing of the past.”

After 2 years of doubts and uncertainty, and despite the war having a huge impact, 2022 marked a reversion to the pre-pandemic world, with renewed confidence in the art market, the launch of new art fairs, and the return of in-person exhibitions.

The 59° Venice Biennale “The Milk of dreams”, curated by Cecilia Alemani, closed in November its record edition: with more than 800thousand tickets sold, it’s the highest attendance in the 127 years of history of the Venice Biennale. 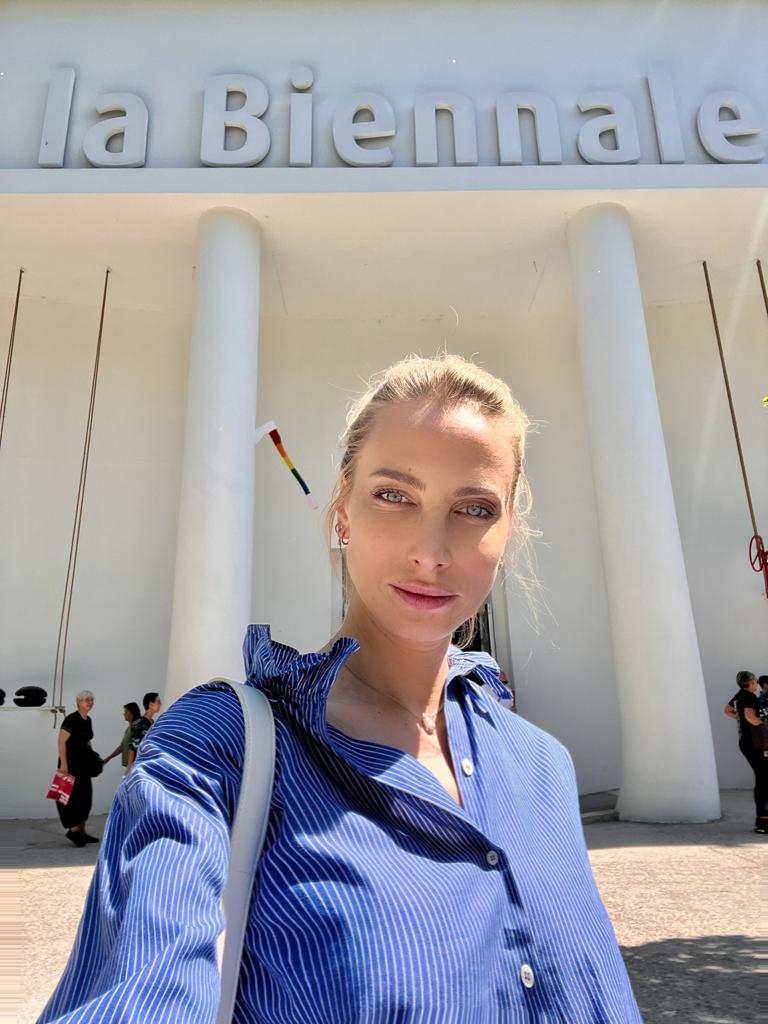 Whitney Biennial took place after a year of suspension due to COVID. Titled “Quiet as It’s Kept”, the 2022 edition featured an intergenerational and interdisciplinary group of sixty-three artists and collectives whose dynamic works reflect the challenges, complexities, and possibilities of the American experience today.

Two new art fairs were inaugurated this year: ‘Paris+, par Art Basel’, a new section of the Art Basel set at the feet of the Tour Eiffel, and the Frieze Seoul, the first Asian fair that included more than 118 galleries worldwide.

The auction houses are creating again, and in general, the art market is rising up, in a positive trend after 2 years of stasis.

Philips declared 2022 as “the best year ever”, with auction sales for $1.3 billion, the highest annual total in the company’s history for the second consecutive year, and has beaten the most valuable lot ever of the auction house: ”Untitled” by Jean-Michel Basquiat from the collection of Yusaku Maezawa, which made 85 million dollars.

With its 8.4 billion dollars made, Christie’s is the undisputed queen of international auction sales.

This year art world experienced two of largest and most exceptional art collections’ sales.
One was Macklowe collection auctioned in May, which generated $922 m,
the other one Microsoft co-founder Paul Allen’s collection sold in November for $1.5 bn, which became the biggest art sale in history, and setting numerous new auction records.

The only negative trend in auction selling is set by China, due to the zero-tolerance policy on COVID.

China, in fact, in the same period of 2020/2021 was the unchallenged leader of this segment while today it has lost the -33% and left the head of the market that has been regained by the United States, growing by +20%.

It was undoubtedly a banner year for the ultra-contemporary market and the under-40 artists.
The number of artists under 40 at auction increased fivefold and their turnover increased twenty-six times in just over twenty years and in the first half of 2022 stood at a record figure of 200.9 million dollars.

Rachel Jones is one of the most promising British artists working today; her works have been acquired by esteemed institutions worldwide, and her painting “Spliced Structure” broke the million-dollar mark and set the promising artist’s current auction record.

In “The Milk of Dreams” exhibition at the 59th Venice Biennale, one room was dedicated to Louise Bonnet’s Pisser Triptych”, a work with recalls religious iconography, apart for its subject matter: hulking bodies peeing. Bonnet’s work is becoming increasingly welcome beyond just institutional spaces. 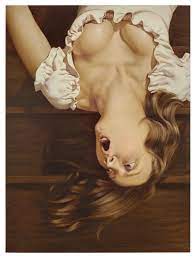 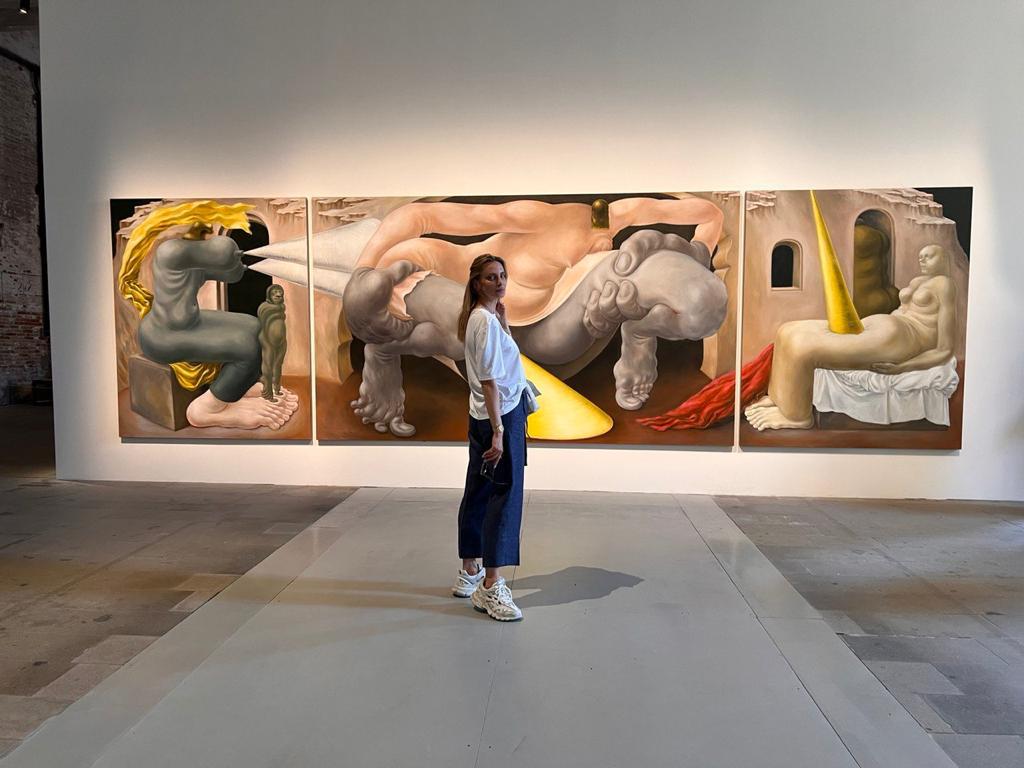 If in 2021, figuration was everywhere, but this year, the tide seems to be shifting and abstraction is taking over faces, objects, and recognizable objects. Paintings are still the favorites for collectors, but the trend seems to shift more to abstracted figures and metaphors.

For instance, at Gagosian’s Frieze London fair, abstract painter Jadé Fadojutimi’s works, each priced at £500,000 were sold out before the fair even opened. Jadè Fadojutimi, There exists a glorious world. Its name? The Land of Sustainable Burdens, 2020

“The Milk of Dreams” exhibition at Venice Biennale presented the subconscious, the mythical, and the spectral through a female-led list of Surrealists like Jane Graverol, Unica Zürn, and Alice Rahon, alongside contemporary artists like Dora Budor, Marianna Simnett, and Raphaela Vogel, who explore those themes in new ways.

NFTs, a trend that I’ve talked about that seems to be taking over the world at the end of 2021, seems now like a big bubble ready to implode: if in February Pak’s “Clock” was sold for a record $53 million in Ethereum, and plenty of galleries moved to cater to this new segment of collectors, by May, much of the shine of blockchain-based works was depleted by the enormous crash in the prices of cryptocurrencies.

And the market for NFT’s collapsed as dramatically – sales volume stood at $9m in November, compared with $93m just sic months before.

Despite that, the art world continues to find ways to work with NFTs: Christie’s, for example, announced its new platform, Christie’s 3.0.

On the other side of NFTs, there’s no doubt that AI is becoming increasingly more prevalent in the art world: algorithmic paintings are spreading all around, from social media to exhibitions in museums like the MoMA. AI-generated artwork is increasing and probably will mark a huge slice of the art market next years, whether the ethical implications are good or bad.

With both NFTs and AI artwork, technology has now become intertwined within the art world. This is evidenced by the unprecedented popularity of online auctions, digital viewing rooms, and, of course, the growing role of social media in discovering art and artists.

The war in Ukraine

This year is marked by the war in Ukraine: since February 2022, every aspect of the worldwide economy and life has been touched by the conflict, including art.

Many NFT artists used the profits of their work to benefit war efforts in Ukraine, and many auction houses raised money to help in this time of difficulties.

In NY, at Fridman Gallery, “Women at War” featured works by a selection of the leading contemporary women artists working in Ukraine, and provides a context for the current war, as represented in art across media. Several works in the exhibition were made after February 24, 2022, when Russia began its full-scale invasion.

New York-based art dealer Cuban Fine Arts and EUASU (the Ukrainian Academy of Sciences in Ukraine)  started the project “Art Against War” to support scholars, journalists, photographers, and people in need due to the present conflict in Ukraine. The participants in the project are Ukrainian artists who express the courage and unity of the Ukrainian people through their art.

“In the Eye of the Storm: Modernism in Ukraine, 1900 – 1930s”, in Madrid, is an exhibition that collects early 20th-century masterworks from Ukraine’s National Art Museum left Kyiv shortly before the city was struck by the heaviest bombardment of missiles by Russian forces during the year. 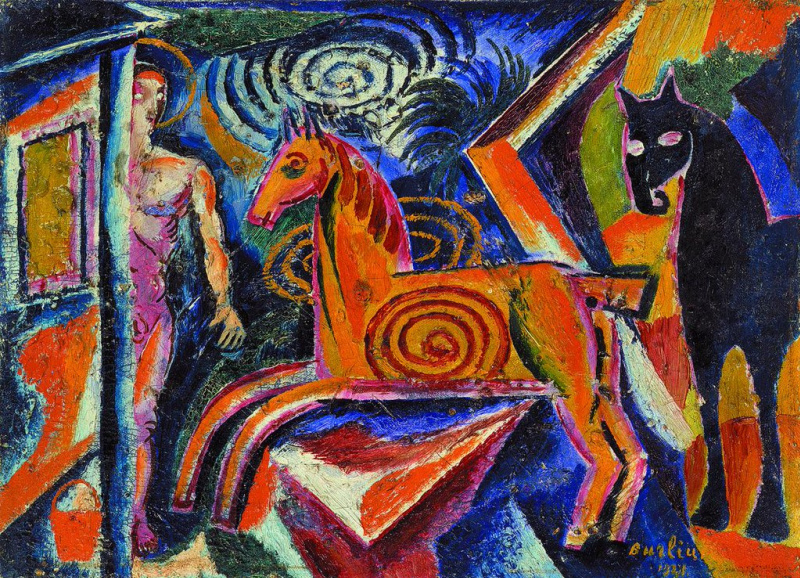 “Carousel” (1921) by David Burlier, a painter associated with the Futuristmovement.

Also, at Venice Biennale, The Future Generation Art Prize @ Venice 2022 has been replaced by the collateral event “This is Ukraine: Defending Freedom”, in partnership with the Office of the President of Ukraine and Ministry of Culture and Information Policy of Ukraine, presenting the work of contemporary Ukrainian artists whilst also contextualizing Ukrainian history and culture with support from international artists. 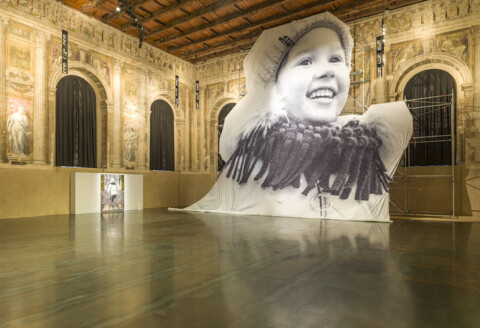 The future is female

Female artists utterly dominated the biggest contemporary art exhibitions and prizes in 2022. The Venice Biennale’s “The Milk of dreams”, curated by Cecilia Alemani, was dedicated to female artists, and the Golden Lion for best contribution went to Simone Leigh. The award for the best pavilion was won by Great Britain for an exhibition curated by Sonia Boyce, and the Golden Lions for Lifetime Achievement went to Katharina Fritsch and Cecilia Vicuña. 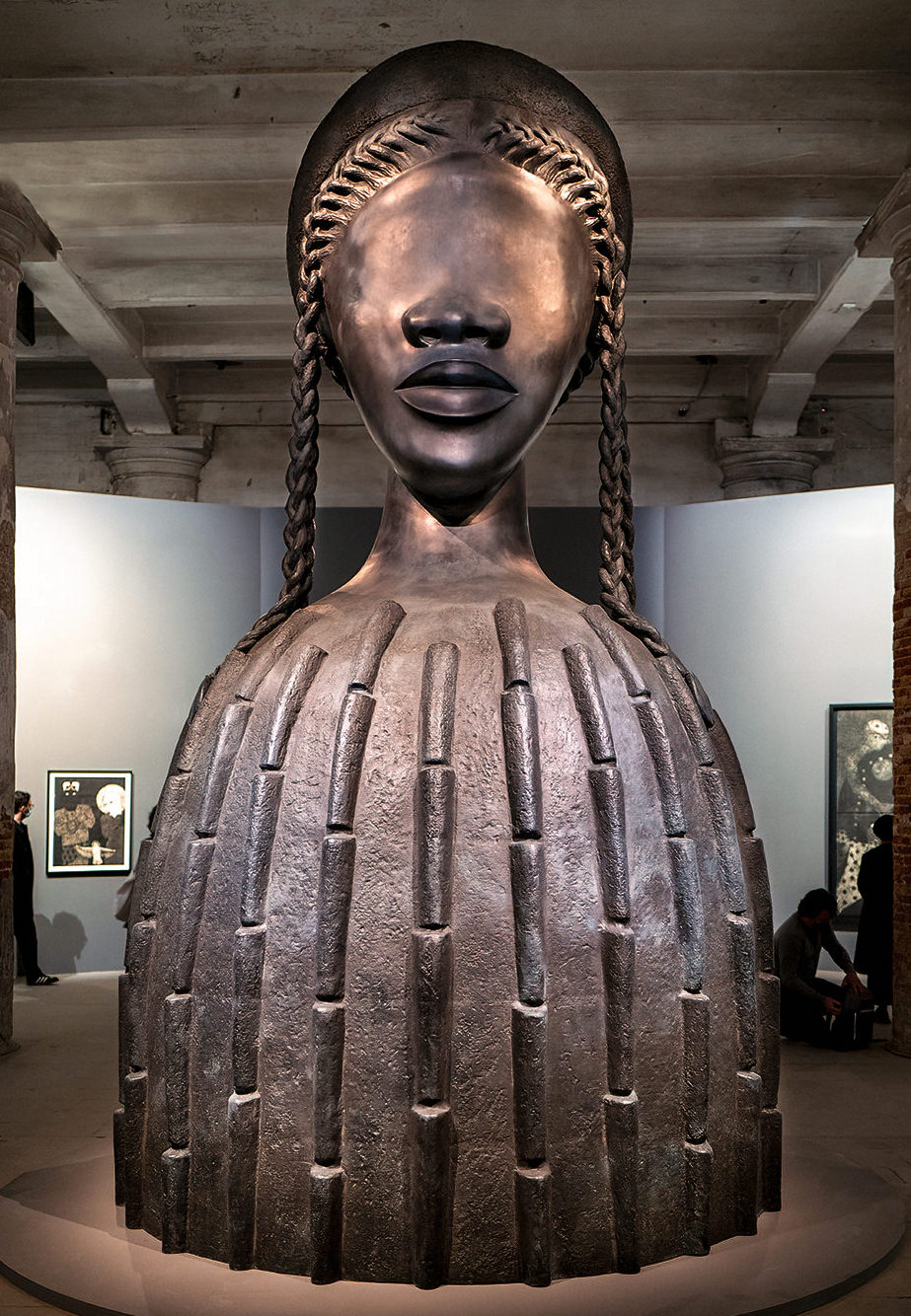 The Turner Prize 2022 was won by Veronica Ryan ahead of Heather Phillipson, Ingrid Pollard, and non-binary artist Sin Wai Kin.

The winner of the Marcel Duchamp Prize is the French Mimosa Echard, highlighting the increasing relevance of women in art.

A piece of huge news concerning international prices is that after 26 years, Guggenheim canceled the prestigious $100,000 Hugo Boss Prize.

New museums opened this year for the very first time, despite the years of lockdown when this possibility seems to fade away. Not only Europe, but most of them are opening in Africa, India, Turkey and China.

The Instanbul Museum of Art  is set to enliven a seaside stretch that has also seen the recent opening of Galataport, a multipurpose development with a long pedestrian promenade along the

Opened in November 2022, the Grand Egypt Museum in Giza is the biggest museum in the world dedicated to a single civilization.

In India, in Bengaluru, businessman Abhishek Poddar, known for his eclectic collection of art and photography, opened the Museum of Art & Photography. More than 18,000 of his own pieces will be on display here.

It’s been a  very good year for art, despite the war coming up after 2 years of uncertainty. Auction houses closed the year with a positive trend of profits.

Technology has now become irreversibly intertwined within the art world, both with AI-generated artworks and NFTs.

New museums are opening for the first time, marking a good signal for the world to reopen their frontiers to visitors and tourists.