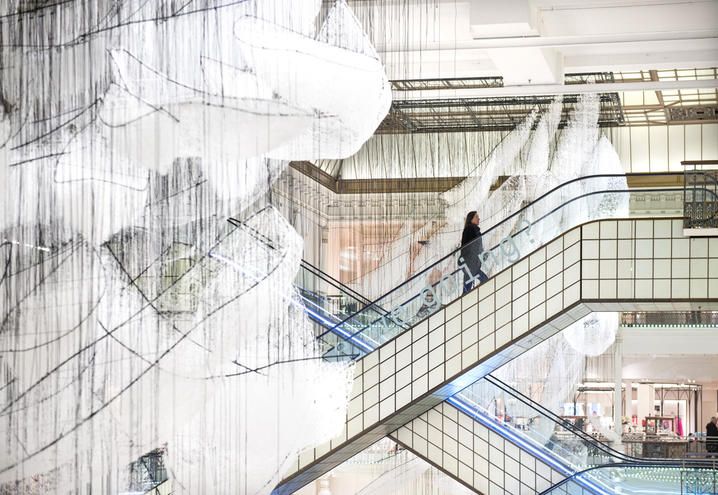 As we have seen, investing in art has become a common practice for large fashion companies and this form of new patronage is increasingly supported by institutional initiatives, not without a certain audacity combined with high economic opportunities, making success in showing also private collections to the general public, which otherwise would be inaccessible.

In recent years the numerous foundations have assumed a role of great importance in promoting contemporary art and in popularizing the work of more or less emerging artists, as well as having started urban redevelopment processes by creating new attraction poles thanks to exhibition spaces designed by well-known architects, not only “containers” but real works.

In addition to the aforementioned Fendi, in Italy it is the Prada Foundation with its two offices – in Milan and Venice – which pursues a cutting-edge cultural commitment also with respect to European experiences and long-term innovative projects by supporting young artists who are not yet established.

Born in 1993 at the behest of Miuccia Prada and Patrizio Bertelli, the current Milanese headquarters is a sort of campus that invites the interaction between different languages ​​and disciplines such as cinema, music, literature, philosophy, art and science.

This year, the London Design Museum will dedicate a major retrospective to the Italian fashion house, highlighting the innovation and creative approach that characterizes the company’s business and further proof that art, fashion and design are intertwined. 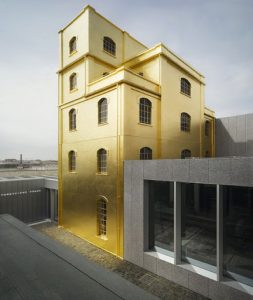 Also in Milan, the Trussardi Foundation – a “nomadic institution” established in 1996 – carries out projects that bring together contemporary art and city spaces through the eye of international artists.

Among the many projects, Elmgreen & Dragset’s “Short Cut” of 2003; the solo show of Sarah Lucas at the Diurnal Hotel Venice in 2016 and this year the installation of Ibrahim Mahama at the bastions of Porta Venezia.

In the next edition of Miart 2020, the intervention “The collectivity project” by the Danish artist Olafur Eliasson awaits us, which will invite citizens to build their ideal city from Lego bricks.

At the head of the Foundation which boasts prestigious collaborations with the Tate Modern in London, the Kunsthaus in Zurich and the Venice Biennale, are the women of the Trussardi family: Beatrice, Maria Luisa and Gaia supported in turn by private patrons and by companies that participate as sponsors. 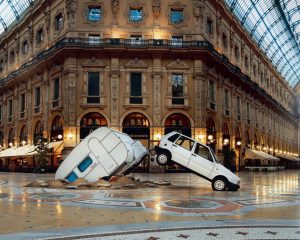 In Italy many important projects have been launched thanks to the foresight of fashion-related personalities with a strong passion for art: in Reggio Emilia the desire of Achille Maramotti – founder of Max Mara and passionate collector – to create a collection of contemporary art takes shape already in the 70s. The works, representative of artistic trends from 1945 until today, are initially exhibited in some spaces of the establishment until 2003, when the old Reggio Emilia complex will be transformed into a real exhibition space dedicated both to the permanent collection and to temporary exhibitions for emerging artists.

The collaboration with the Whitechapel Gallery has also led to the birth of the Max Mara Art Prize for Women, a biennial award aimed at supporting young female artists residing in the United Kingdom.

Another important recognition is the Furla Prize – now in its 10th edition – which has seen great names in contemporary art alternate in the role of artistic consultants and jury presidents such as Joseph Kosuth, Michelangelo Pistoletto, Kiki Smith and Vanessa Beecroft. The Foundation of the same name, established in Bologna in 2008 by Giovanna Furlanetto, supports and encourages young Italian talents with a view to future development through various training projects.

Not least is Hugo Boss, who makes a great contribution to contemporary art with the biennial prize of the same name.

Established in 1996 and coordinated by the Guggenheim in New York, it does not provide any kind of limitation for age, sex or nationality and in addition to the recognition of a prize of $ 100,000, the work of each winning artist is presented in a personal exhibition at the museum.

In addition to the ones mentioned, there are many foundations that operate in Italy in promoting culture and the protection of the historical-artistic heritage, as in the case of the Benetton Foundation of Treviso, established in 1987 and concentrated on the protection of cultural heritage or like the Zegna Foundation in Trivero (2000), in the Biella area, an aggregation centre that blends culture and nature in an ad hoc project that focuses on site-specific works of art.

The great protagonist in terms of foundations, however, is France, a country in which the proliferation of these cultural activities is also aided by the generous tax breaks according to the Aillagon law of 2003, called the “patronage law” which has introduced important tax reliefs (even up to 60%) for those who invest in art.

The passion for art that guides the two great tycoons and collectors Francois Pinault (Kering group) and Bernard Arnault (LVMH group) – whose rivalry is known – pushed them to create important exhibition and cultural places, not only in Paris.

Pinault – one of the greatest collectors of contemporary art – between 2006 and 2009 inaugurated Palazzo Grassi and Punta della Dogana in Venice, spaces restored and set up by Tadao Ando, where exhibitions are regularly organized also with the involvement of artists in the creation of site-specific works.

The Japanese architect was also involved in the design of the new museum of the Pinault Collection, which will open this year and will be located in the historic building of the Paris Stock Exchange. 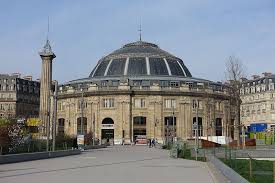 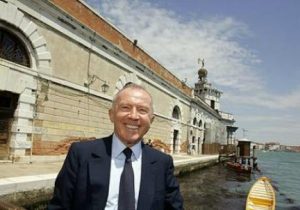 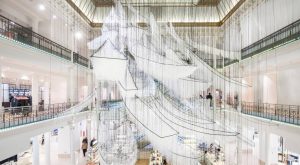 The “rival” Arnault, another great patron, opened the futuristic and highly visited Louis Vuitton Foundation in Paris in 2014 based on a design by Frank Gehry, a structure that has become an emblem of 21st century architecture and already a work of contemporary art in itself.

Arnault’s commitment is aimed at promoting French and international contemporary art, with a special focus on music and sound art.

The Foundation organizes important exhibitions which also have the merit of making incredible private collections known to the general public. 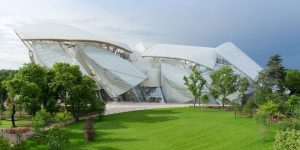 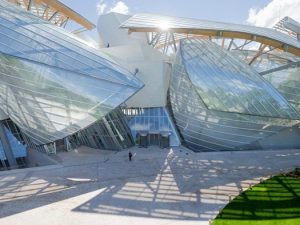 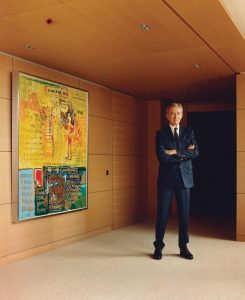 In 2018, the very famous Galeries Lafayette opened a space for contemporary art in the Marais on a project by Rem Koolhaas, – architect who also restored the Milanese headquarters of the Prada Foundation – “Lafayette Anticipations” as the name suggests, it is a centre of innovation with the aim of creating new artistic and cultural heritages through workshops, ateliers, debates and performances. 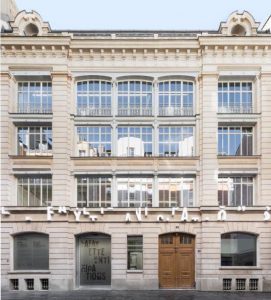 But when did the first contaminations between art and fashion start?

We have to go a little back in time, until the early 1900s when the dialogue between the two disciplines was explored by Art Nouveau artists applying their aesthetic conceptions to women’s clothes intended as artistic clothes not conforming to the fashion of the time.

One of the first to try his hand at fashion creations is Gustav Klimt, creating highly innovative clothes for the Viennese atelier of Emilie Flöge – his muse and companion.

The precious decorative style with small tesserae blends with the modern cut of the clothes, giving life to an experience that will remain unique in the context of the Art Nouveau. 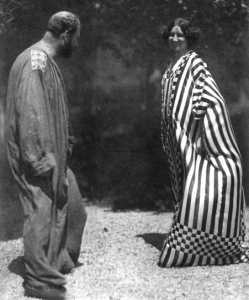 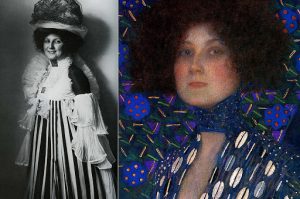 Shortly afterwards Sonia Delaunay, an artist who with her husband Robert carried out research on the perception of light and colour, converges these studies first on applied art and then also on fashion by creating colourful and abstract fabrics.

They were responsible for the first experiments with geometric prints on fabrics that had a strong impact on fashion by opening up a particularly innovative line that will also be developed in the years to come by other artists and stylists.

The close connection between the two areas that materializes in Delaunay’s clothes finds its theoretical consideration in the book she wrote in 1927, “The influence of painting on fashion”.

In her “Simultaneous Workshop”, the first tailoring works that dictate the rules of French fashion of the 1920s and 1930s were born, so much so that the great couturiers of the time competed to win one of her designs. 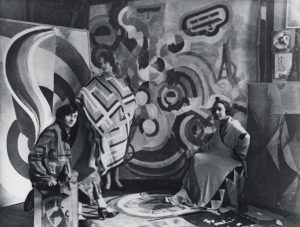 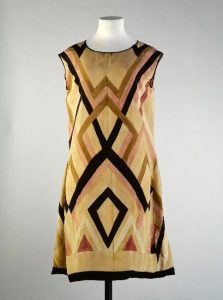 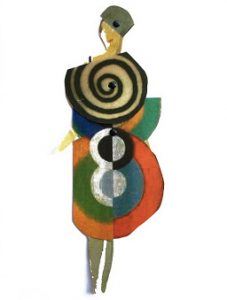 With the historical avant-gardes of the early 1900s, the relationship between art and fashion became even more symbiotic and it was the futurists – interdisciplinary par excellence – who were among the first to perceive the potential of dressing in a colourful, eccentric and unconventional way.

Supporters of a revolution that embraces every aspect of daily life, for futurists even clothing must reflect the dynamic ideal as opposed to the grey of the bourgeois suit, and in 1914 Giacomo Balla presented the “Manifesto of the anti-neutral dress”. 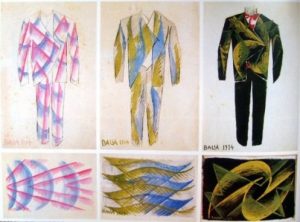 Avant-garde experiments also come from the Bauhaus which, starting from 1920, has included the weaving workshop in its program where new stimuli and stylistic innovations are born.

The influence of Klee, Kandinsky, Moholy-Nagy and Itten on Annie Albers – who works on the basis of pure colours and geometric shapes – favour the affirmation of trends towards abstraction, with the result that fabrics and patterns will increasingly resemble with geometric paintings. 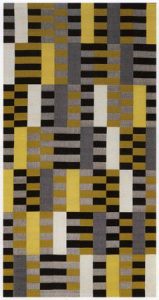 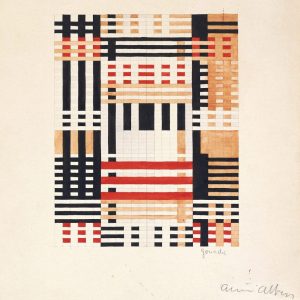 Abstraction and geometries have entered the collective imagination and the homes of thousands of women also thanks to Pierre Cardin, visionary stylist who created structured clothes made with unconventional materials, inspired on the one hand by the theme of space and the moon landing, on the other, precisely to the experimentation of the avant-garde on geometric motifs.

Excellence in the world of fashion, he was inspired by stylists such as Issey Miyake for the creation of sculpture-dresses and minimalist patterns. 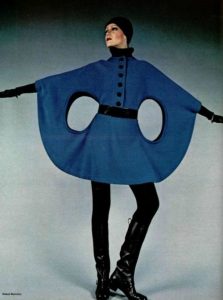 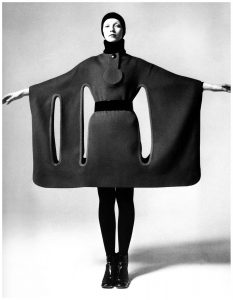 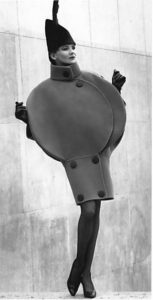 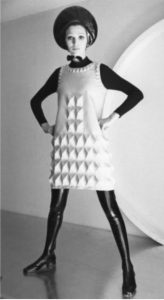 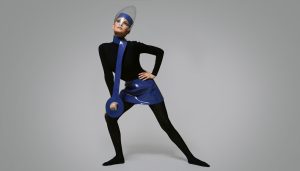 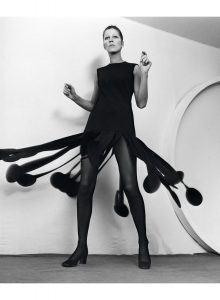 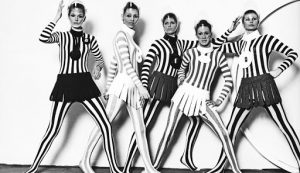 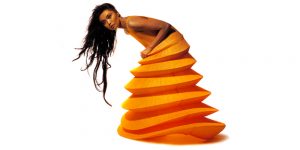 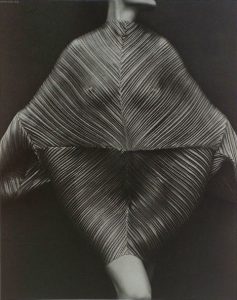 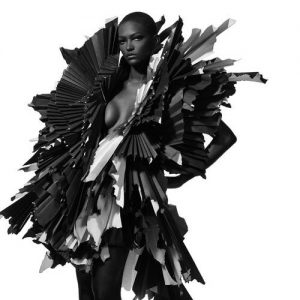 Little by little the dress becomes more and more a work of art in all respects – almost a support that replaces the canvas – and not just something to wear: this is the case of the “Filzanzug” felt suit created by Joseph Beuys in 1970 or the “Untitled shirt” by Roy Lichtenstein of 1979, which incorporates the Ben-Day dots technique of the famous canvases, up to the disturbing dress-provocation “Mur de la Montée des Anges” (1993) by Jan Fabre made up entirely of insects. 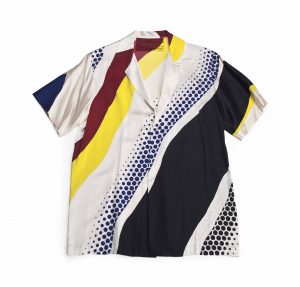 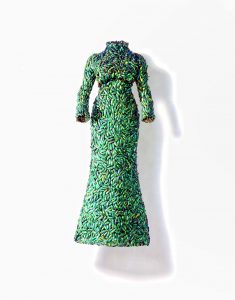 Oscar Wilde said: “Either you are a work of art or you are wearing it.”

But is it still true today?

Today, more than ever, art is inspiring and, having come outside the museums, is addressing us directly.