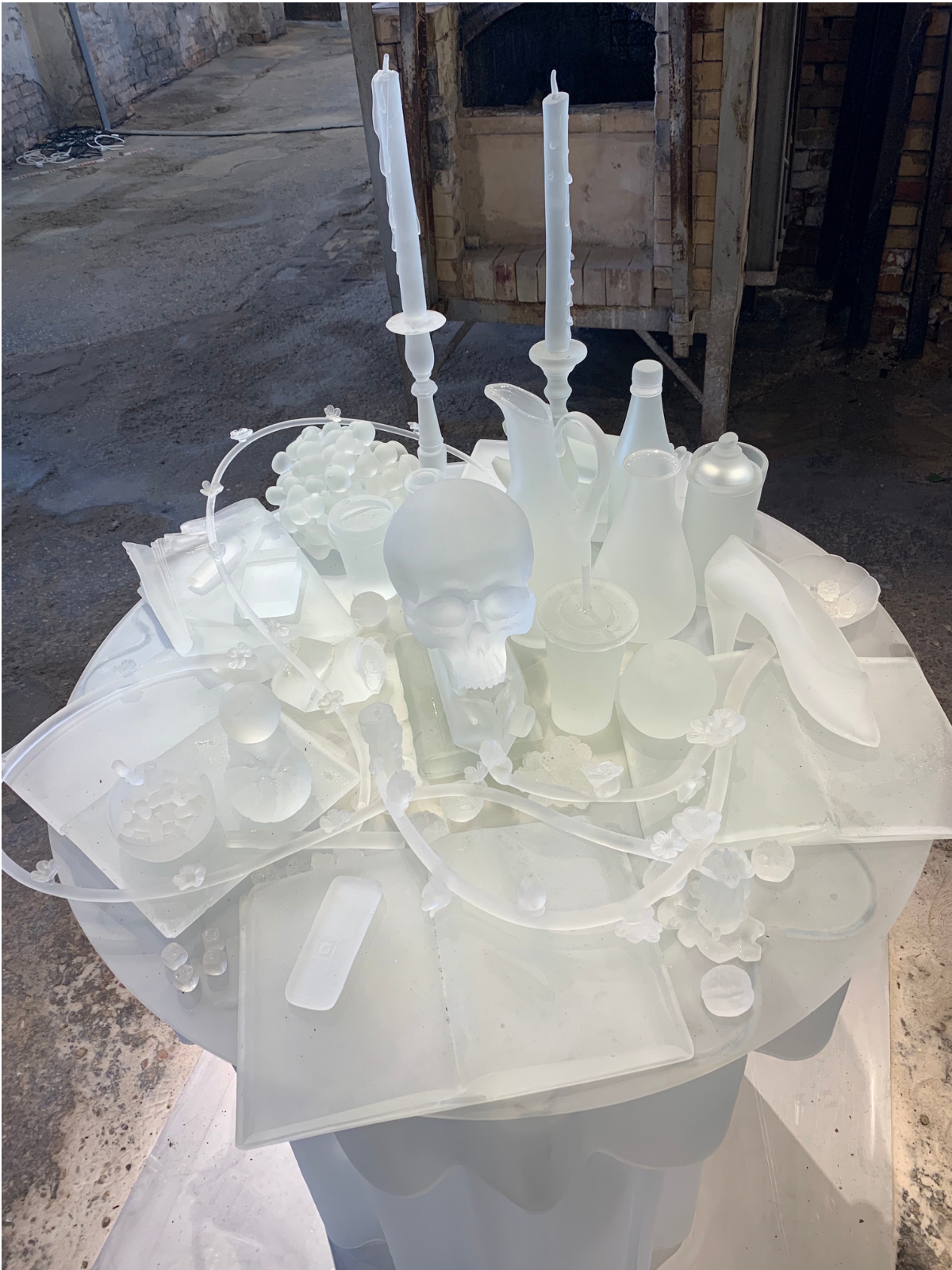 This year marks the 10th anniversary of the Glasstress project and 30 years of the Berengo studio, the projects born according to the idea of ​​Adriano Berengo with the aim of developing cooperation between famous artists, designers and glass artisans from different countries.

The combination of the conceptual approach of the artists with the technical skill of the masters of Murano has revived and opened the doors to a new chapter of the ancient Venetian tradition, bringing it into the future.

The creation of the Berengo Studio project dates back to 1989, when Adriano Berengo decided to buy out an old glass furnace on the island of Murano – now turned into a evocative exhibition space – in order to cultivate the union between modern art and the ancient glass processing technique.

The inspiration comes from the American movement Studio Glass and from the experiments of Peggy Guggenheim, who, along with Egidio Costantini, the “master of masters” in the art of glassmaking, introduces some great artists of the time, such as Picasso, Arp, Ernst and Chagall, to work with this special material.

Adriano Berengo was inspired by these outstanding precedents, and over 30 years of activity, more than 300 artists have created their works in collaboration with the masters of Murano.

The Glasstress exhibition, which has now become an important event, was born in 2009 as an official side event of the Venice Biennale to share the extraordinary results achieved by this new combination of the two disciplines.

The exhibitions are also held thanks to the contribution of the Berengo Foundation, an institution founded in 2014, supporting the visionary project through side events, including educational initiatives and a rich exhibition program.

On the occasion of the 6th Glasstress exhibition, one of its sections is devoted to the most important projects and works historically relevant to the project from its inception to the present day.

The retrospective curated by Kohen Vanmechelen, reproposes the works of so renowned international artists as Jaume Plensa, Mat Collishow, Erwin Wurm, Tracey Emin and Jan Fabre, and is flanked by a special project by visual artist Robert Wilson.

The main section “How Glass Changes Our Perception of Space”, curated by Brazilian artist Vik Muniz, presented in turn at the exhibition with a hyper-realistic self-portrait, shows artists, both displayed in previous editions, and artists invited for the first time. Among the big names returning are Ai Weiwei, Laure Prouvost, Tony Cragg, Thomas Schütte and Joana Vasconcelos, while among the newcomers Carlos Garaicoa, José Parlá, Rose Wylie and Prune Nourry emerge.

Some of the new projects presented in this edition are related to the theme of ecology and the relationship between man and nature, as the works of Prune Nourry, Pablo Reinoso and Valeska Soares, who – with different results and methods – have drawn inspiration from the city of Venice, to raise the problem of pollution and climate change.

Other artists, such as José Parlá and Monica Bonvicini, have instead focused on political and social issues: the Cuban artist refers to the features of glass – a fragile but sharp material – to speak about recent political events and reflect on the weakness of human being.

Monica Bonvicini, an artist born in Venice and ra winner of the Golden Lion at the 48th Biennale in 1999, crystallizes in this material the violence of an act of attack, a metaphor for the fight against abuse of women and any kind of aggression.

The various activities of the Foundation are also closely related to the Venice Biennale not only in terms of related activities and cooperation: some of the works created in the Berengo laboratories are an integral part of the projects presented by some national pavilions in the framework of this 58th edition.

These are the glass sculptures created by Laure Prouvost for the French Pavilion, and the 300 roses that make up the installation of Renata Bertlmann, the first female artist to represent Austria at the Venice Biennale.

Also, the work of blown glass “The Sword in the Rock” (1998), presented by Liliana Moro, one of the three artists representing Italy, has been  created thanks to the Berengo studio.

The Glasstress exhibitions have been presented in museums and institutions around the world, including the Makslas Muzejs “Rigas Birža” in Riga, the Millesgården Museum in Stockholm, the Museum of Arts and Design (MAD) in New York, the Beirut Exhibition Center (BEC) of Beirut, the London College of Fashion and the Wallace Collection of London, the Ptuj City Gallery of Ptuj, Slovenia.

Artists who return with unpublished works: 14

The big names of the retrospective / Anniversary highlights: